Connectivity as the key – the technology of digitization

With DMG MORI connectivity, DMG MORI is providing open and system-encompassing connectivity from the machine to the cloud-based IIoT platform.

The machine tool is still the main focus of the DMG MORI business model. Nevertheless, the landscape of the industry is changing rapidly, and therefore also the product range of the world market leader. Among other things, automation is continuously gaining momentum. An example of this are 29 of the 45 EMO exhibits, which are equipped with innovative automated solutions. Particularly industrial digitalisation is dynamically increasing in importance. In addition to more than 30 digital innovations from the area of the “Integrated Digitization” offensive, the focus is on the comprehensive CELOS update and particularly the subject of connectivity at EMO. With CELOS, DMG MORI has a consistent digitization strategy at all levels of the value chain – from planning and preparation through production to monitoring and service.

Open and system-encompassing connectivity from the machine to the cloud-based IIoT platform is the key characteristic of industrial digitization. This is exactly what the machine tool manufacturing trendsetter is providing for its customers from the EMO onwards with DMG MORI Connectivity: Secure networking of DMG MORI machines and also selected third-party machines.

All internationally established protocols are supported, such as MQTT, Mtconnect, OPC UA, the new umati standard and all of the main IIoT platforms such as ADAMOS, MindSphere and FANUC Field. Important to know: Connectivity is always free for DMG MORI customers, since the open interface from EMO will be included in the scope of delivery of all of new DMG MORI machines as standard from the EMO onwards. DMG MORI Digital has been established together with CPRO for providing service and support for all DMG MORI Connectivity solutions of the machine tool manufacturers. This joint venture specialises in the networking of machines. It supports customers directly on site with advice and qualification, and by means of rapid implementation of digital DMG MORI and partner products. For example, at the EMO there is a PLC-independent CELOS update which will bring all 15,000 installations on the market and all versions from the last six years to a common status. 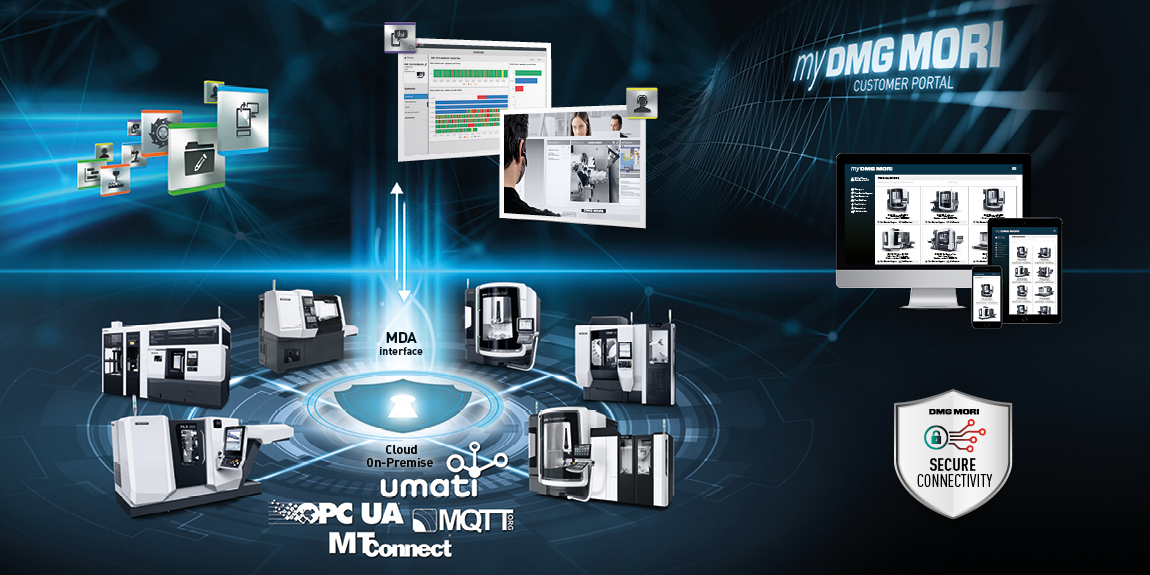 DMG MORI is presenting more than 30 new digital products at EMO, including DMG MORI Connectivity, for the secure networking of DMG MORI machines and selected third-party machines. All of the internationally established protocols and the most important IIoT platforms are supported.

The standard is “Key". And “umati” is the new standard in the machine tool industry for open and unrestricted communication within the shop floor and with higher-order IT systems. umati is the result of a VDW initiative within the VDMA, which DMG MORI has decisively pushed ahead and co-developed within a small core group. The result, which will be presented on the DMG MORI stand in Hall 2 and also by other umati partners at EMO, is a so-called “OPC UA Companion Specification”, especially for machine tool manufacturing. Basically, it is a binding lexicon via which the signals from the control unit and the meaning thereof are defined in a clear and uniform way for everyone.

In future, it will be possible to integrate machine tools into user-specific value creation systems in a manufacturer-encompassing way using the “umati” standard. This applies to communication from machine to machine and with higher-order IT structures, such as in the MES area, also with a view to interoperability with the world of the industrial Internet.

On the way to becoming the global standard

Equipped with convincing arguments such as this, the intention is to establish umati as the global industry standard in future. The prospects aren’t bad: At the EMO alone, more than 70 companies are following DMG MORI’s example and exhibiting a umati application in Hanover. These include all of the major players in the industry in Germany, as well as the most important control unit manufacturers worldwide.

From Plug & Play to the IIoT platform

As well as open M2M communication within machine tool manufacturing, umati will function beyond this as far as the IIoT platform. ADAMOS GmbH benefits from this directly. ADAMOS knows what to expect with its manufacturer-independent range of platforms thanks to umati. The data provided via umati is semantically structured, meaning that the ADAMOS semantics can be perfectly coordinated with it.

Seamless networking from a single source

ADAMOS was founded as a strategic alliance for the future topic of “Industrial Internet of Things” by world market leaders in mechanical and systems engineering. As a founder member, thanks to umati DMG MORI is now in a position to offer its customers barrier-free vertical networking from a single source for the first time.

Contact us for all issues related to the DMG MORI technical press.

Thank you very much for your interest in our products.
To download our PDF brochures please fill in the form below.